Artrage!: The Story of the BritArt Revolution Elizabeth Fullerton 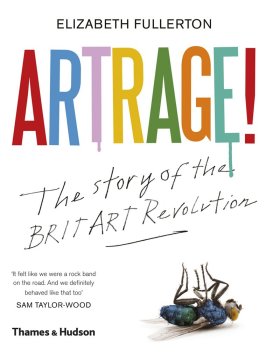 Artrage!: The Story of the BritArt Revolution

The first definitive history of the Young British Artists movement, featuring extensive interviews with its key players The Young British Artists (YBAs) stormed onto the British contemporary art scene in 1988 with their attention-grabbing, ironic art, brazenly exploding art-world conventions. Alternately praised for its witty energy and dismissed as trivial gimmickry, their work had a profound impact both on the art scene and on public consciousness that continues to be felt today. Now, almost three decades on, Artrage! tells the story of the YBAs with the benefit of perspective, chronicling the group’s rise to prominence from the landmark show ‘Freeze’, curated by Damien Hirst, through the heyday of the 1990s and the ‘Sensation’ exhibition, to the Momart fire of 2004 that seemed to symbolize the group’s fading from centre stage. Drawing on more than 50 interviews with the key BritArt players and extensive research, Elizabeth Fullerton examines the individual characters, their relationships to one another, crucial events and seminal artworks within the political, economic and artistic context of those years. Nearly 200 images – including all of the well-known works as well as many lesser-known but equally interesting pieces – are reproduced, as are many photos of the group provided by the artists and published here for the first time. Quotations bring out the distinctive personalities and provide fresh insights into the period and the people, among whom are Damien Hirst, Rachel Whiteread, Tracey Emin, Jake and Dinos Chapman, Sarah Lucas and Gary Hume. A street map shows where they lived and worked and other places of interest, and the book’s postscript offers an update on the artists’ careers and fortunes in the last decade. Elizabeth Fullerton is an art historian with over 20 years’ experience as a journalist writing on art, culture, news and politics in Europe, the Middle East and Central America. Her articles have appeared in many international publications, including the Financial Times, the Independent, the Washington Post and ARTnews.